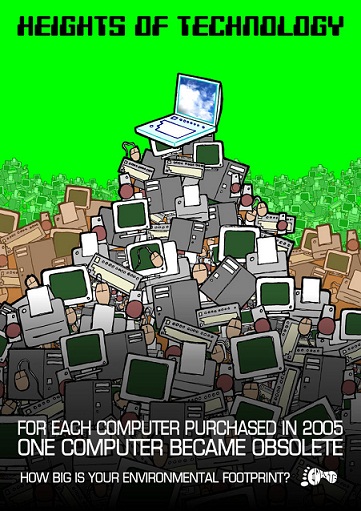 Over the past couple of years, many states across America have been adopting e-waste regulations that will halt the large amount of electronics that are being dumped into landfills. The laws that are being passed will place more responsibility on consumers and manufacturers. Even retailers like Best Buy, who openly supports the e-waste legislation, has taken the initiative to help reduce the problem of e-waste by offering a drop-off for consumers to bring back batteries and other e-waste to be recycled. The amount of electronic waste in landfills is growing extensively each year. In fact, it is the fastest growing waste in the United States. About 80 percent of the waste goes to the landfills in America, and between 50 percent and 80 percent of the remaining material goes across seas to countries like China, India and Africa to be recycled.

The problem with this is that the e-waste releases poison that mix together, which can be devastating to the health of its inhabitants. It’s known to cause respiratory problems and immunologic risks. In the United States, the toxic chemicals can seep into the groundwater.

The e-waste legislation is determined to prevent environmental and health problems that are arising from this issue. Certain states require its residents to recycle electronic waste, including California, the Carolinas, Washington, Oregon and Minnesota, to name a few. In short, about two-thirds of the U.S. population is under the regulation of the e-waste legislation. Each state has its own laws regarding the matter. So far, great results have been seen across the nation.

The legislation is bringing together recyclers, retailers, manufacturers and research institutes to search for solutions to this issue. Because of the laws being passed, recyclers will be required to track every wire, casing or other component that they deal with. The e-waste legislation will prohibit toxic e-waste from being imported to developing countries. All hazardous materials that contain lead and other poisons will have to be disposed of properly. Over 70 countries have agreed to the Basel Convention. This is a law that halts the importation of hazardous e-waste.

With the e-waste regulations, manufacturers will be able to get access to materials they need without digging through earth’s finite minerals. California was the first state to adopt this legislation back in 2003 and as of 2011, one billion pounds of computer waste had been recycled. If this continues, we could potentially see a large reduction in the amount of e-waste around the world.

Celebrate Earth Day in Your Own Way

E-waste: Rapidly growing in the Market

E- Waste: The Price We Pay

America Recycles Day is a nationally recognized day that is celebrated on November 15th in hopes of bringing awareness to the need for Recycling in the world. Although they focus on basic reusable items such as paper and plastic we must also remember the side of E-waste. Over the past years E-waste has become a huge issue due to the boom in technology and its updates. We must not look past it and remember it this year.

NTRecycling is here to help and we offer our services to anyone in the D.C, Maryland and Virginia area. If you have any electronics in your home you’d like to dispose of properly do not hesitate to contact us. We are open six days a week Monday through Friday. Our hours are from 9 to 5 on weekdays; this is when we do our pick-ups!

Ntrecycling would love to help you so our doors are open for all the Drop Offs of electronics you have for the rest of this November for America Recycles Day 2015!

(CRTs and TVs are excluded from this deal)